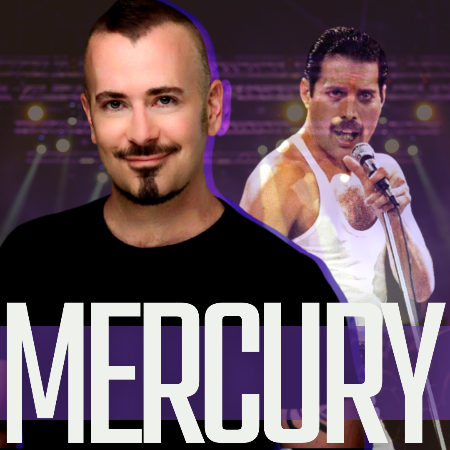 Mercury: The Music and The Life of Queen’s Freddie Mercury

Mercury: The Music and The Life of Queen’s Freddie Mercury

Mercury is not as much a tribute to Queen as an exploration of the man’s life and work. When Farrokh “Freddie" Bulsara was eight years old, his parents sent him thousands of miles away to a boarding school in India. The family saw each other once a year. The very shy boy Freddie felt very much alone and lonely. He developed a protective skin. In music, he started to find a way out. The bravado developed at school became a big part of his stage persona. Part broken man and part rock god, Freddie Mercury showed it all on stage, and left if all there. In this new show about the man he reveres, Terry Barber sings Freddie’s songs, and explores the conflicts between his personal and public lives revealed by his music. Terry shares the story of each song, and locates its place in Freddie’s constellation of selves.

On stage during his career, Freddie performed only the occasional cover. The classic "The Great Pretender" by the Platters – which Terry sings in this show – was a song that spoke to him. A lifelong lover of opera, Freddie saw himself in the sad clown from Pagliacci, only pretending to be brave.

In the mid-80s, Freddie was diagnosed with HIV. Though at the beginning he publicly denied rumors about his condition, his bandmates knew long before the rest of the world. It was Freddie's determination to record and perform through his failing health that inspired guitarist Brian May to write Show Must Go On! and Who Wants to Live Forever. On November 23, 1991, Freddie Mercury announced publicly that he was suffering from AIDS, and asked the world to join him in fighting it. He died the following day.

Mercury stars international countertenor Terry Barber who, like Freddie, has a four-octave range. He was a longtime member of the Grammy Award winning all-male a cappella chorus Chanticleer, and a Grammy nominee for his own album, Christmas Presence.

Terry Barber has performed all over the world, including the Metropolitan Opera, Carnegie Hall and Moscow's Svetlanov Hall. His voice can be heard on many major record labels with a variety of music makers from Madonna to the London Philharmonic.