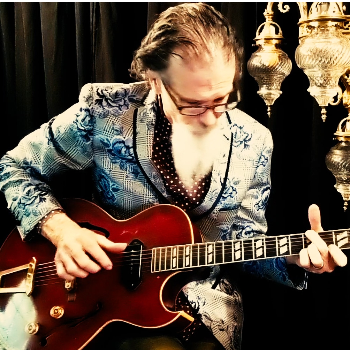 Walter Parks is a performer of the highest level.

If you share with Blue Strawberry a genre-agnostic appreciation of the cabaret form (his calling is swamp blues and Americana), there is no one doing it better than Walter Parks. His show is a pure and incandescent enchantment, a joy and a thrill of consummate artistry.

"A listen to Parks' soulful Americana rock is to be immersed in warm guitar melodies, smoky vocals and troubadour narratives that gather strength with age." WNYC

In August 2020 writer, guitarist and vocalist Walter Parks was invited by The Library of Congress to archive his research on and perform his arrangements of music made by southeast Georgia’s Okefinokee Swamp homesteaders – hollers, hymns and reels. For 10 years Parks, a Florida native, served as the sideman guitarist to Woodstock Festival legend Richie Havens. Now based out of St. Louis, Walter has recently co-written with Stan Lynch, former Tom Petty drummer and has performed at various venues with R&B drum legend Bernard Purdie and at Lincoln Center with Judy Collins. Walter tours with his own trio Swamp Cabbage, with his solo show Swamp By Chandelier and with an Americana spirituals project called The Unlawful Assembly co-founded by drummer Steven Williams. Walter was a member of The Nudes, a popular folk duo, with cellist Stephanie Winters.