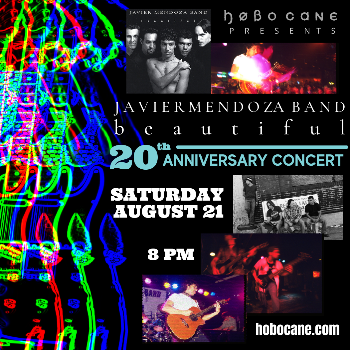 20 years ago the hugely popular Javier Mendoza Band, St. Louis’s own, released their great album Beautiful. The quintette’s sophomore record made major waves, taking the group to a new level. With the single Beautiful getting extensive radio play, Javier sold out the now legendary venue Mississippi Nights for the album release. The RiverFront Times voted Javier Mendoza Best Latin Band in 2000 and 2001, and Best Pop Band in 2003 and 2004.

Come celebrate the 20th anniversary of the release of Beautiful with Javier and the band’s other original member David Karns, along with a stellar group of accompanying musicians on drums, bass, and piano. Javier and friends will perform an “MTV Unplugged” version of the album in its entirety…. along with a few of his more recent hits!

This is a one-time-only opportunity to hear Javier perform Beautiful in its entirety in St. Louis. Unmissable.