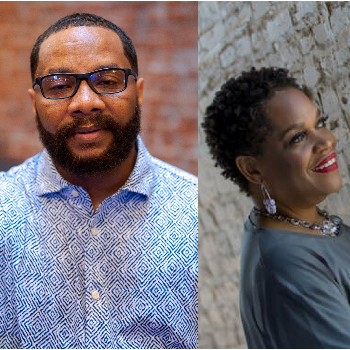 In this all-new show, dynamic drummer and band leader Demarius Hicks takes a leap to explore singing. The show is also featuring the exquisite, timeless voice of Anita Jackson!

Demarius Hicks is an exceptional musician whose voice of choice is drum set.  He has mastered a variety of musical styles including gospel, straight ahead, funk, fusion, Afro-Cuban, big band, drum and bass, rhythm and blues and hip hop.

A native of East St. Louis, Illinois, Demarius Hicks, or “Heavy D” as his colleagues affectionately call him, began his musical journey playing drum set as a child in church.  Pursuing his love for music, Demarius later studied under the leadership of his mentor Marvin Sparks, Director of Percussion studies at UMSL, who introduced him to the wide world of percussion. Demarius’ artistic uniqueness lies in his distinctive sound, authenticity and creativity. A sensitive, colorful and innovative drummer, Demarius mixes different textures and tones on the drums and cymbals to produce breathtaking colors and images.  A versatile musician, Demarius approaches each genre in its’ authentic context, yet compliments it through incorporating various styles in an ingenious manner to create an interesting and innovative sound.  His distinctive sound combined with his approach to music compliments his expressive creativity.

A native of St. Louis, Anita Jackson came home after twelve years in New York. A graduate of the American Music and Dramatic Academy in New York, she performed as a background vocalist for Bette Midler on her Grammy Award winning song for Song of the Year in 1991 "From a Distance", Patti Austin on "I Can Move this Mountain", Mariah Carey on "Anytime You Need a Friend", recording artists Chico DeBarge, Joe, Erykah Badu and most notably Cissy and Whitney Houston. She is a vocalist on Cissy Houston's Grammy award winning "Face to Face" album, as well as her 1997 Grammy award winning "He Leadeth Me" album. As a gospel BGV, Anita has performed with Shirley Caesar, the late Albertina Walker, Dorothy Norwood and Tramaine Hawkins. Anita was a featured vocalist on the 2014 Reach Week in New York City live recording for New Hope for the World Ministries recorded in Harlem, NY under the auspices of Rev. Terrance L. Kennedy, with Vickie Winans and Melanie Daniels.

In St. Louis, Anita has been a featured player with the St. Louis Black Repertory Theatre under the direction of Ron Himes. She has performed in "Gospel at Colonus", "Ain't Misbehavin'", "Caroline or Change" and "Blues in the Night” for which she was nominated for the St. Louis 2010 Kevin Kline Award for Best Actress in a Musical. Anita performed as Bertha in "Hello from Bertha" at the first annual Tennessee Williams festival in St. Louis under the direction of David Kaplan. She was nominated for Outstanding Supporting Actress in a Drama by the St. Louis Theatre Circle - 2016/2017. In 2018, Anita performed the role of Mother Shaw in the Black Rep's "hattitude" production of Crowns written by Regina Taylor, to open their historic 42nd season.

Anita has appeared as a featured vocalist with several jazz, R&B, soul, blues and gospel music groups in and around St. Louis from Jazz St. Louis (formally Jazz at the Bistro) to BB’s Jazz & Soups to the St. Louis Ethical Society to the Heman Park Starlight Concert Series to the Sheldon Concert Hall - as a solo artist as well as a collaborative artist with many of St. Louis’s finest musicians. In 2018, Anita accepted a fellowship as a resident artist with the Kranzberg Arts Foundation (KAF) for which she is one of nine featured jazz performance and recording artists.

Anita gives thanks to the family of Christ and praises God for HIS matchless goodness and mercy. She dedicates her performances to her beautiful daughter Christian for teaching her to trust God John 3:16.