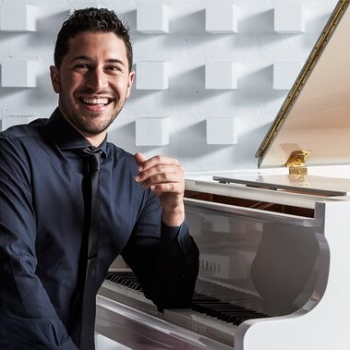 Winner of the 2019 American Pianists Awards

Multifaceted American jazz pianist and composer Emmet Cohen is one of his generation's pivotal figures in music and the related arts.

Downbeat praised the "nimble touch, measured stride and warm harmonic vocabulary" he employs to communicate with other musicians and audiences at what he terms "the deepest level of humanity and individuality." Leader of the "Emmet Cohen Trio" and creator of the "Masters Legacy Series," Cohen is an internationally acclaimed jazz artist and dedicated music educator. Emmet Cohen is the winner of the 2019 American Pianists Awards and the Cole Porter Fellow of the American Pianists Association, and Artist-in-Residence at the University of Indianapolis.  He was a finalist in the 2011 Thelonious Monk International Piano Competition.  Cohen has appeared at major international jazz festivals and at Lincoln Center's Rose Hall and Washington's Kennedy Center, in addition to headlining at the Village Vanguard and other major New York jazz clubs.  For many years he was Hammond B-3 Organist-in-Residence at Harlem's SMOKE jazz club.  During the lockdown he created "Live From Emmet's Place," a weekly livestream that received millions of internet views worldwide.  Cohen is a Mack Avenue artist. A Suzuki piano student at age three, Cohen holds jazz piano degrees from the Manhattan School of Music (M.M.) and the University of Miami (B.M.). Emmet Cohen has performed, recorded, or collaborated with Ron Carter, Benny Golson, Jimmy Cobb, George Coleman, Jimmy Heath, Tootie Heath, Houston Person, Christian McBride, Kurt Elling, Billy Hart, Herlin Riley, Lea DeLaria, and Bill T. Jones.

“Cohen, 28, has a breezy, phlegmatic command at the keyboard, and a deep well of historical jazz references at his fingertips. If he wasn’t already an obvious heir apparent to the neo-traditional jazz mantle, his win at last weekend’s 2019 American Pianists Awards ought to make it official. ”

— ZACHARY WEG, ALL ABOUT JAZZ

[Cohen is] not just the poster man for contemporary jazz, breathing 2020s finesse onto early twentieth century swing, he is a supremely gifted and impassioned artist of the highest order.”

— ZACHARY WEG, ALL ABOUT JAZZ