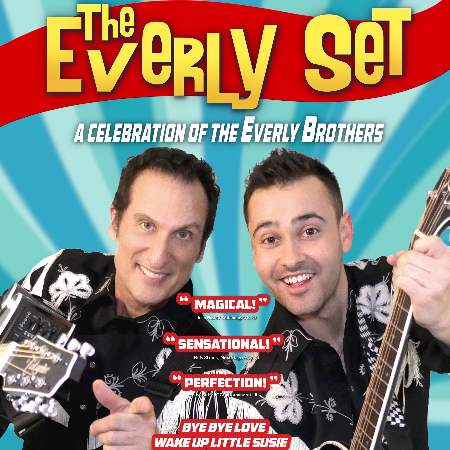 The Everly Set: A Celebration of The Everly Brothers

The Everly Set: A Celebration of The Everly Brothers

In 1957, teens Phil and Don Everly supercharged the vocal sound of Rock’n’Roll with “Bye Bye Love” and “Wake Up Little Susie”, unleashing the sparkling vocal harmonies that would influence The Beatles, Simon & Garfunkel, The Beach Boys, The Hollies, The Eagles, Peter Paul & Mary, and the Bee Gees.

Now, six decades later, two acclaimed singer-songwriters with a mind-bending three-decade age difference combine millennial pluck with baby-boomer sass to present The Everly Set: Sean Altman & Jack Skuller Celebrate The Everly Brothers, featuring Bye Bye Love, Wake Up Little Susie, Cathy’s Clown, All I Have To Do Is Dream, When Will I Be Loved, Crying In The Rain, Love Hurts, Bird Dog, Claudette, Walk Right Back, and more hits and rarities in concert.

Jack Skuller, despite his youth (age 25), could certainly be viewed as a music industry veteran. The prodigious talent released his first single at the age of 14 on Bar/None Records, setting the stage for an authentic rock and roll upbringing. Radio Disney took notice and sponsored a 15-city tour garnering the of attention of outlets from Consequence of Sound to Teen Vogue to American Songwriter. Jack released two singles on Walt Disney Records. In 2014 Skuller was recognized by Songmasters and the Songwriter’s Hall of Fame for his breakthrough talent as a singer/songwriter/performer. They awarded him the Buddy Holly Prize in tribute to the legacy of Buddy Holly and in recognition of Skuller’s all-in-one talent. Jack was also featured in Seventeen Magazine’s “Hot Guy Panel” in 2015.

Ex-Rockapella star Sean Altman is “tuneful and sharply witty” (Los Angeles Times) and “relentlessly clever” (Chicago Tribune), with “catchy melodies, clever arrangements and lyrics that yield satiric gems” (Washington Post), combining “the tunefulness of the Beatles and the spot-on wit of Tom Lehrer” (Boston Globe) with a “silky tenor voice that produced chills” (New York Times). Altman — widely regarded as “the Father of Modern A Capella” — co-founded and led the pioneering vocal group Rockapella through its heyday on the Emmy-winning daily PBS-TV series “Where In The World Is Carmen Sandiego?”, for which he co-wrote the ubiquitous theme song. His original songs have been featured on dozens of TV and radio shows including Saturday Night Live, NPR’s Fresh Air with Terry Gross, The Daily Show With Jon Stewart, The Colbert Report, and Schoolhouse Rock. Altman has twice performed at the White House, he has shared concert stages with Billy Joel, Steve Miller, Whoopi Goldberg, Jon Stewart, Stephen Colbert, Jay Leno and Joey Ramone, and he has recorded with artists as diverse as Steve Miller, XTC, John Cale, Richie Havens and They Might Be Giants.