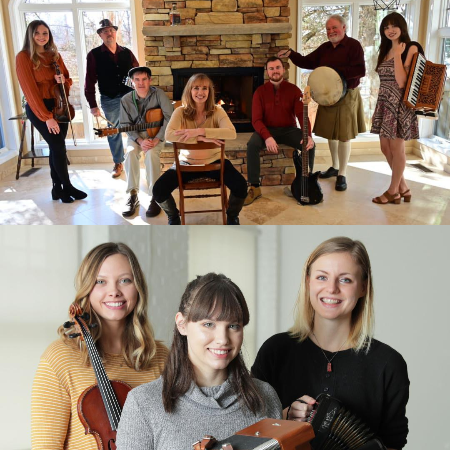 It doesn’t have to be St. Patrick’s Day for an amazing night of Celtic music. Nevertheless, we’re halfway to The Day and it’s time to celebrate!  Band leader Mitzi MacDonald is originally from Nova Scotia, Canada.  She performs with her super talented family, and band, Keltic Reign; songster Randy Getz, guitarist Mike Levine, and percussionist Marc Waters.  A recent branch off, Lore, which consists of her daughters, Holly and Ashby, and band mate Griffin Reed, will open the show.

A St. Louis favorite, Keltic Reign has played at countless Irish and Scottish festivals, The Sheldon Concert Hall, The Whitaker Music Festival, Twilight Tuesday, and the Focal Point Theater, to name a few.  Keltic Reign is Celtic with a Kick! It’s their own driving brand of songs from Nova Scotia, Newfoundland, Ireland and Scotland, as well as some originals. They have recorded three albums, and Mitzi has another five of her original material. The band has also become known for the show they host every year at the Sheldon called ‘Christmas in the Kitchen’, which is, quite literally, a Nova Scotia kitchen party on stage at the Sheldon, serving up tea and cookies and great music. Seventeen years in the running, they have raised over a hundred thousand dollars for local children’s charities.

They gave us a stellar sold-out show back in March, and there’s no doubt Keltic Reign’s going to give us another rip-roarin’ good time! You don’t want to miss it!

Griffin Reed, Holly Laws, and Ashby Laws (also of Keltic Reign and the Laws Sisters) have been playing Irish music together since they were children attending St. Louis Irish Arts. After many years of competing and performing in Ireland and across America, in 2019, they formed the group Lore. Lore weaves together traditional Irish tunes and songs with contemporary arrangements and an American folk song tradition; more recently, they've also begun composing tunes of their own. Lore has played venues throughout St. Louis including Tigin, Pat Connolly's Tavern, the Skinker-Debaliviere Porchfest, the Missouri River Irish Festival, and more.