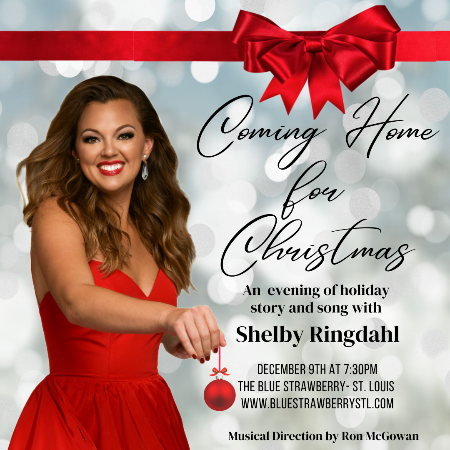 Returning to Blue Strawberry after a sold out performance in February, Shelby Ringdahl is thrilled to bring her brand new Christmas show to St. Louis! After a career as a professional performer in New York City, a year as Miss Missouri and all the tours in between, this show weaves all your holiday favorites together with the stories and songs that lead us home for Christmas. Featuring holiday classics like "Have Yourself A Merry Little Christmas'', "White Christmas" ,"I've Got My Love To Keep Me Warm" and a live performance of her hit single, "Merry Ol' Missouri", this show is the perfect start to your holiday season. Broadway World says, "Shelby Ringdahl deserves praise for her show-stopping vocals" while St.Louis' KDHX says, "Thanks to Ms. Ringdahl, an entertaining evening was had by all."

Shelby Ringdahl is a New York City-based performer originally from Columbia, Missouri. Her voice has been heard coast to coast leading national tours and performing in some of the country's biggest theaters and arenas. Some of her favorite theatrical credits include Jesus Christ Superstar (The Muny), Disenchanted (Snow White), The West End's ABBA Mania (Agnetha), Seussical (Mayzie), and Heathers (Ensemble/ Heather Chandler US). As a concert vocalist, she has been seen on stage alongside Donna Mckechnie, Susan Egan, Jodi Benson, and Jason Robert Brown as well as with some of the country's top symphonies including the Omaha Symphony, Cincinnati Pops Symphony, Fort Worth Symphony, and the Philadelphia Pops Symphony. Shelby is a former Miss Missouri, Top 12 Finalist at Miss America, and was named Best Personality by Entertainment Weekly. She was an overall State Talent Winner, Rookie Talent Winner, and made over 300 appearances during her year of service speaking to over 17,000 of Missouri’s children. Shelby holds her Masters of Arts in Teaching and, when she is not performing, runs her own pageant consulting and production company, The Shelby Ringdahl Collective. Shelby now resides in St. Louis with her husband, Taylor.